The land of rising noodles 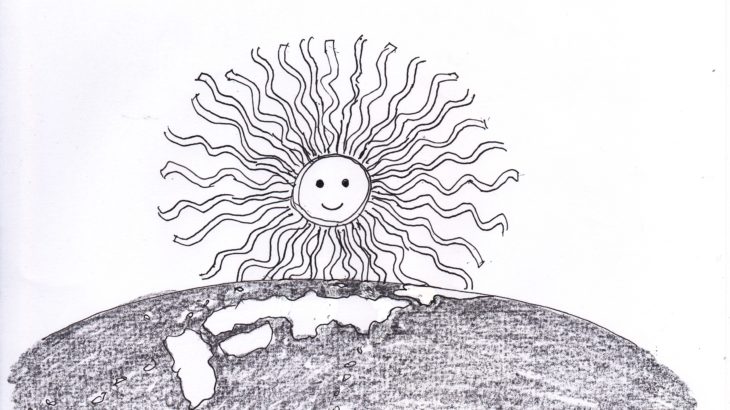 One of characteristics of Japan is openness towards foreign cultures. Japanese have no hesitation in introducing foreign cultures including foods. That’s why you can find almost all kinds of noodles exist on this planet in Japan. This is not an exaggeration. Indeed Japan is the land of noodles. Weather it is Chinese origin, Italian, South Eastern Asia or else, you can enjoy them here in Japan.

As a rule of thumb, Japanese eats noodles several times a week, at least. A few would have them every day!

Now let me tangle you with noodles available in Japan today per the following list.

Which is made from wheat flour, salt and water.
Under this category, there are many different types of Udon depending on thickness. The thickest one is called Houtou from landlocked Yamanashi prefecture. The word Houtou provably derived from a Chinese word Houtong. Flat one is Kishimen from Nagoya area. The thinnest one is Soumen from the Western part of Japan. I like Inaniwa-udon from Akita prefecture for the elegant taste of it.

Kagawa prefecture located in the Northern part of Shikoku declares itself to be the Udon prefecture. Of course other parts of Japan do not agree with this, but as you know well, politically, the first to declare has certain superiority over other passive prefectures.

Made from buckwheat, binding agent and water. Roughly speaking, there are three kinds of Soba. Dark colored one contains bran in high percentage while white one is made of core part of buckwheat only. The third one is in between the two with an equal mixture of bran and the core. Some Soba use seaweed or yam potato as the binder, which gives you good feeling as it goes down. Good Soba can be found mainly in the Eastern and the North-Eastern Japan, like Nagano, Niigata and Yamagata. A record reveals that Soba have been grown in Nagano since the New Stone Age. 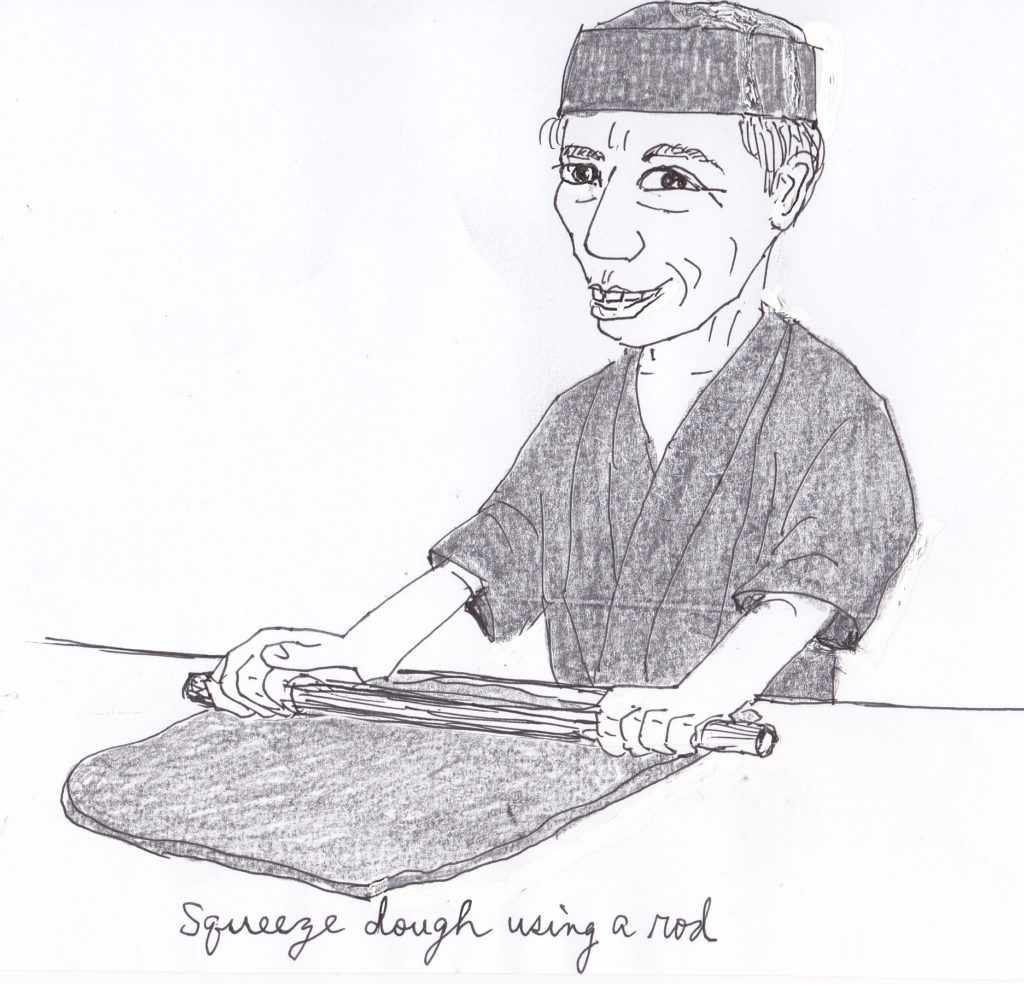 Soba is regarded as a very healthy food. It is a kind of fashion for a retired people to make Soba from buckwheat flour using simple tools, but it will take some time before he can satisfy himself with the quality of Soba. Especially cutting technique is difficult to acquire. Usually persons who try home making Soba are male. Ladies knew right from the beginning that in most cases the try will end up in failure, so they go to super-market to purchase a finished product with no hesitation.

One thing very special about eating Soba is that, you will be served with hot drain water after boiling Soba in a wooden container. It contains many nutrients like vitamins and rutin from Soba, therefore very healthy. Pour it in the soup cup and drink it. 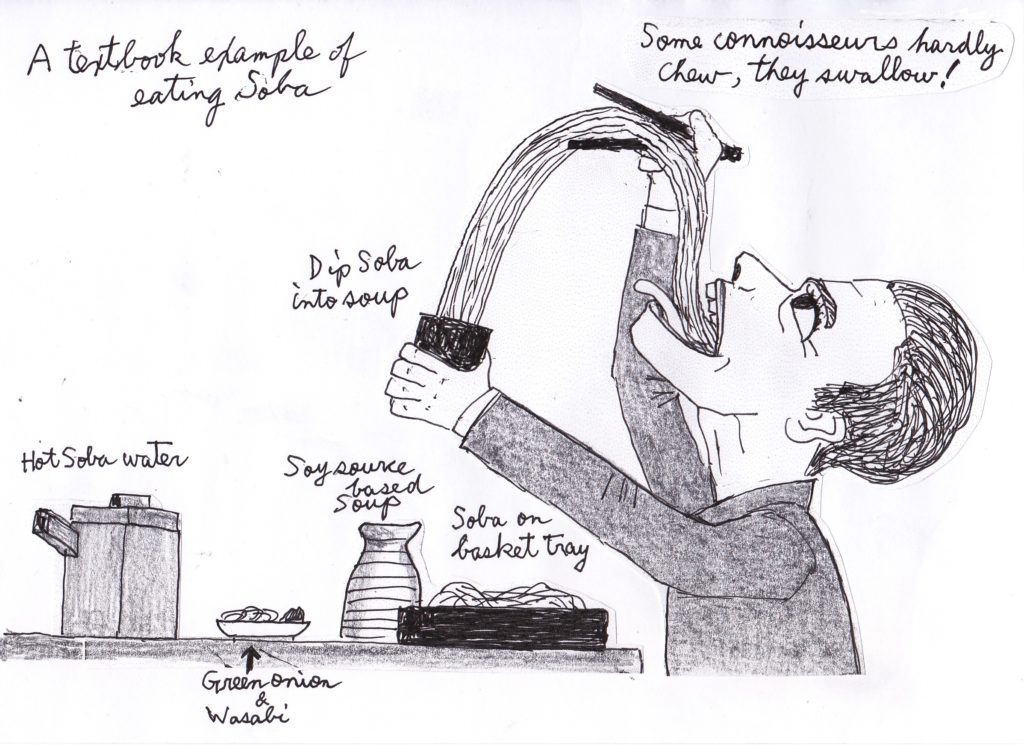 Made from wheat flour and carbonated water. Originated in China and introduced to Japan during Edo era, some 300 years ago or so. The first person to eat Ramen was Mito Mitsukuni, a relative of Shogun.

It has been localized to become very Japanese. There are so many different kinds of Ramen that makes classification difficult. Soup plays the essential part in making Ramen and it takes days to prepare the soup stock. 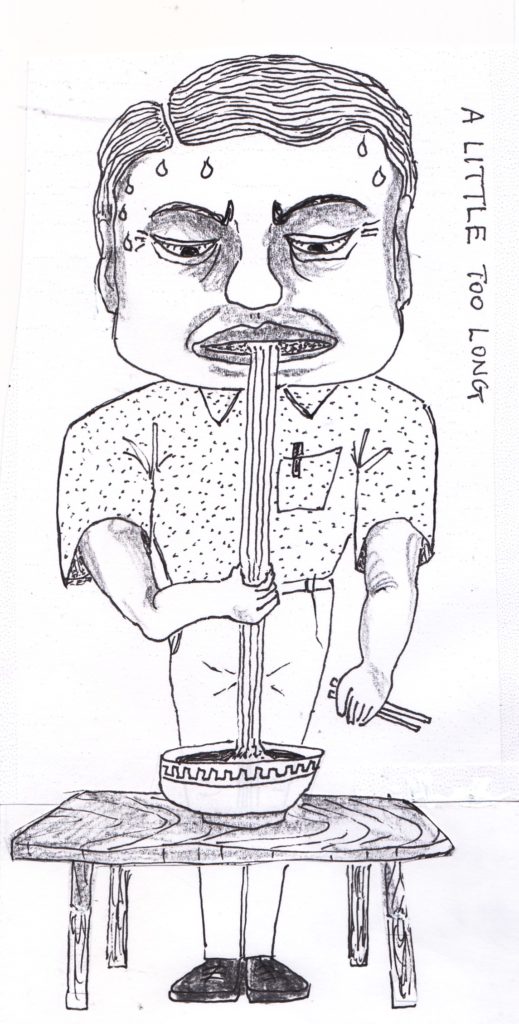 Miso (fermented bean paste) based soup is from Hokkaido and the Northern part of Japan, Soy-source based is from Tokyo and neighboring prefectures. Pork bone soup is from Kyusyu Island. Wakayama is famous for the mixed soup of soy source and pork bone.

Osaka is well known for the value for money foods, but I seldom hear people talk about Osaka’s Ramen.

Most of the time it is cooked as fried noodle or soup noodle but different from Ramen. Soup stock for Ramen requires days or sometimes weeks to create, while Chinese style soup is made on the spot after order is taken.

Made from wheat flour and egg. Needless to say this one is Italian origin. One thing to be noted is that like in many other foreign born foods, there are spaghettis follow Italian tradition, while there are other spaghettis prepared using very Japanese ingredients like nori(seaweed), tarako(cod roe), soy source, and natto(fermented soybeans). Some spaghetti that caries Italian names are Japanese origin. One example is Napolitan spaghetti which is cooked using tomato ketchup instead of tomato source. I think tomato ketchup won’t be used in Italy for spaghetti.

Not only these, we also have other form of spaghetti on free-ways called spaghetti junctions. Oh! Have I made your thinking spaghetti?

While you are in Tokyo or other big cities, you may have seen many Italian restaurants who would serve spaghettis and pizzas. Now, many young Japanese prefer to eat spaghetti than traditional Japanese Soba.

A joke from the West:
What happened to a man who ate too much spaghetti?
He pasta away!

The pronunciation “beefun” is based on Taiwanese and Fujien language.

Vermicelli made from potato starch or bean starch. Fried or salad. Interesting thing is that a manufacturer of Haruasme uses “Malony-chan” as its brand and this confuses some Italian people who come to Japan, as it sounds like Italian, but of course you can’t find the product in Italy.

The name harusame came from the weak Spring rain.

Introduction of Konjac potato into Japan from India took place over one thousand years ago. Indeed long long time ago.

If two people are having an off the point conversation, we call it “a konjac dialogue”, as konjac is very flexible.

Made from kudzu starch. Ingredient for Hot pot dishes. Or you can eat it with sugar syrup as a snack.

Kuzu is a strong plant grown everywhere not only in Japan but also in other part of the world.

Made from tengusa or gelidium jelly (gelatin). Normally eaten with vinegar added soy source. Best during summer season. It’s really a cool Japan food! Low calories food. Good for you if you are on a diet.

If a person or thing goes forward without any effort, we say “Tokoroten style”. Because Tokoroten is shaped into noodle style while going through small holes provided at the end of a handy tool which resembles a small hand pump, and Tokoroten is pushed out from the holes with little effort.

Made of sun-dried convolvulus. After boiling, soy source, sake and sugar are add, and then put it into a rolled sushi as an ingredient. An inexpensive food, so recommended to have it when your “wallet is cold”, meaning budget is limited.

Sliced fresh cuttlefish in strips like noodles. Eat with soy source and wasabi, similarly as other sashimi dishes. It is a peculiarity of Hakodate city in the southern part of Hokkaido, where cuttlefish fishing is very active.

Boil with soy source, sake and sugar. A good hors d’oeuver for sake drinkers. When daikon is sun-dried, it increases vitamins.

In Japan, we call a wretched player “daikon”, however, daikon as a vegetable is very good for your health as it contains digestives. Recommended to eat it after having a heavy meal.

Boil and add soy source to become a hors d’oeuver. Another healthy food. French cooks started to add it to traditional French dishes to cope with an increasing demand to have the food more healthy.

You can enjoy Hijiki by adding soft cheese and green onions. It can be a good side dish for wine drinkers.

Famous areas for picking the alga are the cost of Chiba and Ise bay.

So do you think you have been entangled?
As long as it is about noodles, you name it, we have it!

We have an interesting saying: Hang oneself with noodle. Meaning, try to do something impossible.

We sometime say “be coiled up with a long stuff” which means, better bend than break. Or, if you can’t beat them, join them. So, while you are in Japan, why don’t you try some of the above listed noodles as much as you can.