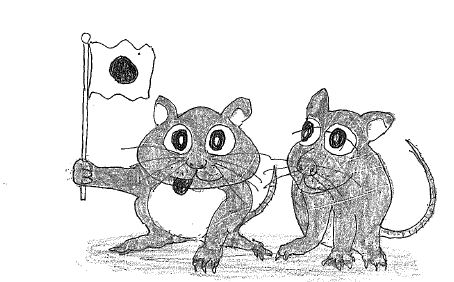 This has been kept secret for a long time, but today, I will let the cat out of the bag specially for you!

I have invented a new cooling system which utilizes nothing but renewable energy!

Oops! Except one thing that it could be a little noisy sometimes.

OK, let’s start with the definition of renewable energy.

According to the International Energy Agency(IEA), it is the energy derived from natural processes like wind, solar, hydro, and bio.

The illustration below shows an example of the simple yet new cooling mechanism using renewable energy source – a pair of mouse and cat.

This is my second to none invention. 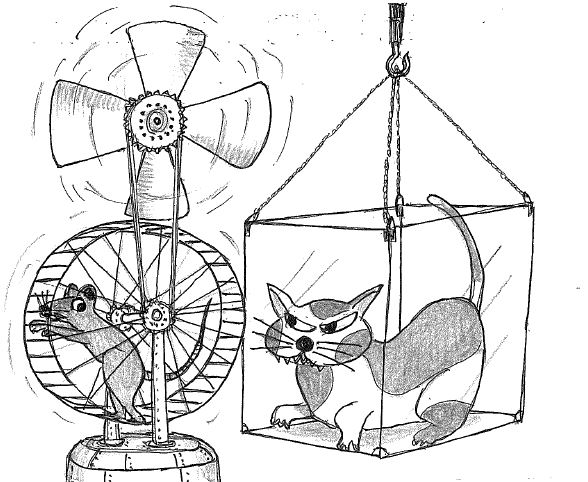 Mice and cats can be found anywhere on earth and the number is countless that you don’t need to worry about their extinction.

Their population is growing at the “mouse-calculation manners”.

This is Japanese way of saying “geometrical progression”.

They are renewable and no doubt bio.

In this mechanism , a cat is placed in a hanged transparent box and she is able to see outside clearly.

A scared-of-cat mouse is on a treadmill, and it will try desperate to run away from the cat.

As the mill turns, the power originated by the mouse will be transferred to a fan located above the mill via a set of belt connecting both.

The fan will cool you while you watch the interaction between the two animals.

If you find the fan speed too slow, you may add another cat in the box.

In the event the mouse is exhausted and no longer can continue the job, you can find a new one quite easily in your kitchen, thus making your kitchen environment sanitary.

This is like killing two birds with one stone, isn’t it.

Have a mice day!